An Unforgettable Experience at Martial Vivot compliments of Caron Paris

As a young man growing up, I longed for the day I could be like my dad and shave. He did it. He was (and still is) my hero. And it would mean I’m a man too. But before I even had peach fuzz, dad told me, “never put a razor on our face.” His reasoning, the hair would grow back quicker and thicker. That said, for years I avoided straight shaves. Instead, I would use an Andis Outliner II, which my barbers used to line me up and would finish me off by giving me a shave with it as well. And years later, I started using an electric shaver dad gave me, a Remington MicroScreen 2 for a closer finish. Both do the trick just fine. That is until my wife kept saying, “babe you missed a few hairs” and “I wish you’d get rid of that thing (the Remington) and get something else. In my head I always reply, “This baby works just fine.” But when an opportunity to experience my first straight shave came my way, care of Caron Paris, I decided to give it a try. 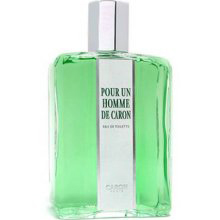 Caron has been around since 1904. It was founded by Ernest Daltroff, who was inspired to become a perfumer after watching his mother get ready for the opera and carefully applying perfume. He was later joined by Felicie Vanpouille in 1909 and the two went on to create scents that reflected its time, e.g. N’aimez que Moi in 1916, which was for the soldiers going off to war to remember their loved ones left behind and Tabac Blond in 1919, which was created to dissipate the odor of cold tobacco. After a few ownership changes, the brand has been updated and now includes skincare.

To commemorate that the Martial Vivot salon is the exclusive retailer for the Caron Pour un Homme skincare collection in the U.S., I was invited to experience its grooming service. I was blown away. Located on 54th street in Manhattan, its exterior gives you the feeling you’re walking into a pub. Once you walk in, however, it’s another story. The salon is slick in a modern way without being over the top. You want this waiting area to be your living room. It exudes sophisticated swag with its flat screen, leather chairs and bar cart.

After being introduced to a few of the men’s scents in the Caron collection, including Pour un Homme, which has been around since 1934, I was introduced to the gent that would be giving me my shave, Garrett Pike. Before I get to that, Caron Pour un Homme is old school all the way. Its lavender and vanilla are very prevalent. It reminds me of a time when men dressed. My pops didn’t have an abundance of suits but whenever the occasion called for one, he brushed and ironed it and made sure he was presentable. Pour un Homme remains one of Caron’s best sellers. It reads, I’m a man with manners, e.g., I say good morning, yes and no thank you and allow ladies to enter and exit first. 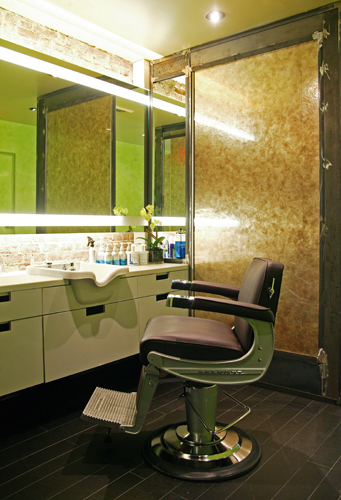 My shave was an awesome experience. All of the products were infused with the scent of Pour un Homme and that layering really made a difference. When Garrett put the hot towel on my face, it was so soothing; I could’ve fallen asleep. The lavender and vanilla really popped and G employed a barber’s trick, he put an extra pinch of the scent on the towel right under my nose. That’s when I realized I was being handled…in a good way. After lathering me up, with precision, he proceeded to get every hair, even the ones I usually miss. When I was done, I felt like a new man. I also felt like I deserved that treatment and vowed I’d do it again. Coincidentally, I met my wife for dinner that evening and after telling her I finally experienced a straight razor shave, she grabbed my face and said while smiling, “Wow, your face is so soft.”

My morning grooming routine gets right to the point. It’s not the three S’s but it’s just enough that I’m comfortable with it. That said, I don’t see myself jumping to straight shaves but I’m more likely to give it a try, as the subsequent closeness really is its selling point. I know this much though, the next big occasion that calls for me to iron and brush my suit, I’ll give Martial Vivot a call, book an appointment with Garrett for a shave and I’ll be sure to dab on Caron Pour un Homme to seal the deal.

Caron Paris skincare products available exclusively in the US at Martial Vivot Salon.