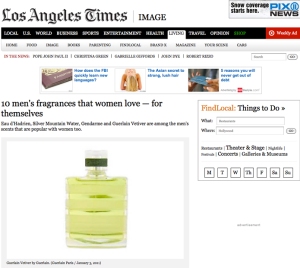 I find it incredibly sexy when I come across a woman who admits she wears men’s cologne. It’s the confidence that comes along with making that choice that does it for me. The industry does a good job segregating fragrances and having the courage to break the rules takes knowing yourself and what works on you.

I discovered that a colleague of mine, Johanna Laracuente, wore men’s fragrances at a party one night and decided to feature her here on Fragrant Moments. The conversation that ensued was refreshing. Johanna revealed she loved the warmth men’s scents offered and just felt they worked with her fierce personality. That night she wore Comme de Garcon’s Man 2 and it worked, so much so I was forced to ask her about it.

I’m reposting this article I came across by Janet Kinosian, 10 men’s fragrances that women love — for themselves because after reading it, I found a lot of what was said, I’ve heard other women say about their reasons for wearing men’s scents. It also features some good cologne you may want to consider adding to your collection.

By the way, it should be noted that this works in the reverse as well. A few scents marketed to women I like to wear include Tom Ford’s Black Orchid, A Different Company’s Oriental Lounge and Banana Republic’s Rosewood. They all include warm spices that appeal to me and aren’t as floral as you’d expect a women’s scent to be. This list surely will grow.

Thank you Mandy Aftel for tweeting this and Janet for writing it.

One response to “Good Read…”