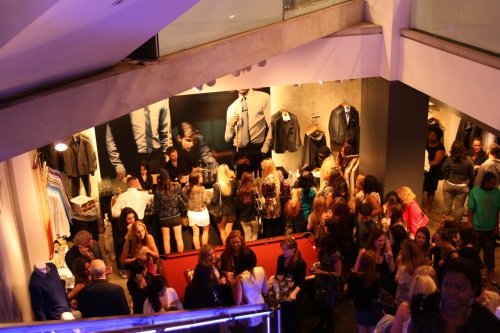 For the second year in a row, I turned the much-hyped Fashion’s Night Out into my own Fragrant Night out. My night was a mix of hitting up some of the crowded boutiques, Bergdorf, Henri Bendel, Gucci and DKNY and sampling some of the fragrances retailing at the better men’s department stores. I must say, as opposed to last year, the staff at the fragrance counters I visited was very helpful. I was even surprised by the offering of samples. At Bergdorf, I was given a sample of Duc De Vervins and at Barney’s I was given samples of YSL’s La Nuit De L’Homme and Costume National’s Scent.

Last year I sampled quite a few of scents, this year however, not so many. There really wasn’t that much out there that I hadn’t seen or smelled already.

My first stop of the night was Bergdorf and it was bananas. Thank God for the men’s store which was a bit calmer but just about shoulder to shoulder. Upon entering, I was greeted by guys playing air hockey and ping-pong. I ran into one of Esquire Magazine’s style arbiters Josh Peskowitz who made me want to own some clay-colored pants. Tom Ford was scheduled to make an appearance and sign the bottles from his collection but I dipped before that scene ensued. I did sample Champaca from his private collection and it left a lasting impression all night. The wine and cognac top notes don’t open boozy at all. In fact, I never felt I was sniffing alcohol. It does, however, have a floral sweetness reminiscent of Le Labo’s Rose 31. As the night wore on, the similarities grew but Champaca didn’t contain that B.O. undertone I detect in Rose 31. I shall own this one-day but for now, the similarities make it feel like a redundant purchase. That being said, it was one of the best of the night.

After stopping in at Gucci, which had a line that wrapped around the corner, I shuffled my way into Henri Bendel, as I wanted to smell Histoires de Parfum’s Défilé New York. Apparently only 150 bottles were created and the scent pays homage to Fashion’s Night Out. As exciting as that maybe, what peaked my interest were its base notes ingredients, which included chocolate and coffee. An added and unexpected treat was the appearance of the brand’s founder Gerald Ghislain. He was super sweet and explained the scent’s influences which he said included the early morning smells of Bryant Park (where Fashion Week was previously held) and editors showing up with their coffee as they waited for the shows to begin. As someone who’s experienced Fashion Week firsthand, I found that story very intriguing.

Overall my fragrant night out was a lot of fun. Défilé was the most original scent I sampled all night. The way fresh-cut grass, bergamont, Rhubarb, chocolate and coffee all play together makes this an incredible scent. I fought the immediate urge to purchase it as I thought I could double back, but I should have known better. After making my way over to DKNY (they know how to throw a party) and having a few cocktails, my plan took a detour down to Soho where I ended the night. As Jesse Jackson would say, “Keep hope alive.” I’ll be calling Henri Bendel to see if Défilé is still available.

One response to “Fragrant Night Out 2010”