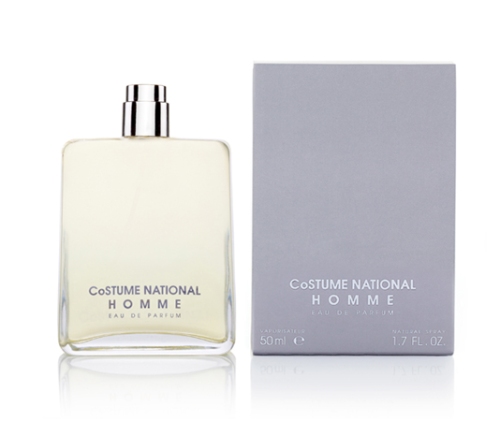 About a week ago, I had the fortune of attending the press event for the launch of Costume National’s first scent for men, Costume National Homme. Let me say from jump, I think this is a winner and I feel that way for a few reasons.

Scent – You ever pick up your favorite men’s magazine and open a few of the scent strips and are left asking yourself, what’s the difference? Not here. This is not one of your run-of-the-mill safe scents. It’s bold, spicy, fresh, seductive, warm and well balanced. Its opening is quite powerful with a very fresh head made of grapefruit, cardamom and bergamot. Middle notes include cinnamon, thyme and cloves. Its base notes include patchouli, sandalwood and labdanum. After a fresh lively burst, the spices quickly come punching to the surface. It is for that reason a slight hand is suggested when applying. Its quite potent. With time, the spices cool and the leather and woods settle in nicely.

Creators – Costume National Homme was creatively directed by CN’s co-founder Ennio Capasa and the scent was developed by Dominique Ropion. For me, learning of Mr. Ropion’s involvement was the icing on the cake. I became intimately familiar with his work through Editions de Parfum where he created two of my favs Une Fleur de Cassie and Vetiver Extraordinaire to name a few. He’s considered a genius by many and I take their word for it. The two aforementioned scents are wonderful and he didn’t disappoint here.

Packaging – Every now and then when you pick something up, you notice how good it feels in your hand. It doesn’t happen often but when it does you remember it. The bottle, which was personally sculpted by Ennio, is fluid and clean. I showed it to my wife and her very first reaction – “it’s very masculine.” Other nice details include the tubing inside the bottle is invisible (if you look for it hard enough you’ll see it but I think you’ll get the point once you see it) and the box’s soft texture and color scheme oozes class.

When you put all of these factors together, you produce a well thought out creation befitting of an entree into the world of men’s fragrances. CN’s creative legacy which is firmly planted in the fashion world is not lost here at all. Homme not only enhances it but just could make fans out of those who have never experienced the world of Costume National.