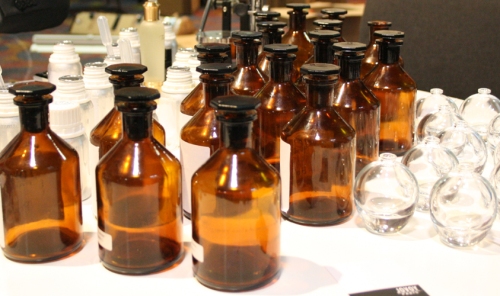 Last week I attended the perfume trade show, PXA. It was held at the New York Hilton and the last day was open to the public and media. As a fragrance enthusiast, I was pretty psyched as it would give me face-to-face time with many of the brands I adore, or so I thought.

If you’ve ever attended a trade show, you know the last day is usually the slowest. By that time, a majority of the buyers have left and exhibitors are clamoring to breakdown…in other words, it’s a ghost town. Well PXA wasn’t quite a ghost town but it was slow, or at least when I arrived. But I have to say it worked to my advantage. It gave me an opportunity to have good conversations with people like Jessica M from Now Smell This (she was such a sweetheart). However, the show didn’t pack the star power I hoped for. But I did learn about a few new brands and made some new friends.

By far, the highlight of the show for me was my custom fragrance experience thanks to Jovoy Paris, a Parisian perfume house founded in 1923 by Blanche Arvoy. I stumbled upon these guys after taking interest in another brand steeped in history, Molinard that happened to be right next door. The display of their bottles, which seemed scientific and geekish, immediately caught my attention. When I found out you could get a fragrance custom made my itinerary for the afternoon was set as well as the growing line of women waiting for their chance as well. After making a few rounds, I came back to the booth and found Francois Henin holding court with four women ahead of me.

Francois, who is one of the three-member team that revived this vintage house, was quite the charming showman. He was patient, jovial and had a story for just about everything…good ones too (a particular bottle’s shaped tied back to his Grandmother riding horses and how she kept it in her riding boots or a particular scent’s highlights tied back to his grandmother carrying orange rinds in her pockets). By the time I arrived, this current sitting was well into their journey but he welcomed me with open arms. He asked questions like “if you’re in a room and you leave do you want your scent to remain,” and “would you like to smell your fragrance on your clothes the day after,” and do you want someone to have to be intimately close to know you’re wearing a fragrance,” to determine the potency of our respective fragrance tastes. It was interesting to hear the ladies responses, some liked soft scents, others wanted to communicate with their scent, while others liked something that packed a punch.

I was amazed as Francois took us through the layering of top notes also referred to as head notes (scent you first smell upon application), middle notes or heart notes (these come to the surface after the top notes ware off), and base notes or bottom notes (the final stage of a scent). Each layer had its own distinctive characteristic and set of scents. He took notes based on what you liked or disliked and when he was finished, summarized what he thought you liked and then began the building process.

Like kids in Willie Wonka’s Candy factory, we were all in amazement as he took out his scales, began playing with droppers, alcohol, testing strips and physically shaking the mixtures to produce bubbling reactions…. say it with me, ooooo, ahhhh. Here’s the kicker, after he finished working on the scents for the four women, he would not let me leave without my creation (I was hoping he wouldn’t let me leave either). The show was literally being torn down around us but Francois would not be deterred. My colleague Harry Sheff from MR Magazine and I smelt a bit of this and that and voila we both had a custom made scent and a parting gift, Terra Incognita, just for being paitent.

My scent has a woody, resinous, animalic presence to it. Its quite potent so it won’t take many spritzes to get the job done. Portions of it remind me of Rose 31 without the floral effect which makes sense in retrospect since it is one of my favorite scents.

I’m quite anxious to see how this develops over time. I’m letting it mature in a cool place free of light. Francois said to give it about 3wks.. I thought I could wait but wore it to a BBQ over the weekend and my lady really liked it. We’ll see how she reacts in a few weeks but regardless I’m thrilled with it and am so glad I attend PXA 2009. By far one of my best fragrant moments to date.