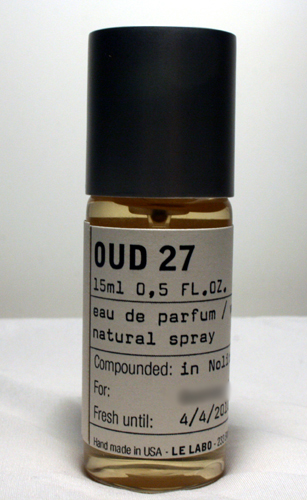 One of my favorite fragrance manufactures, Le Labo, has launched a new scent, Oud 27. It’s their first in three years. When I got wind of the launch, I will admit, I was quite excited. I do not possess a favorite scent but when asked, Rose 31 remains at the top of the list. I’m such a fan that when I visited Paris in April of 2008, the top of my agenda (after watching my lovely lady cross the finish line of the Paris Marathon) was to make my way over to Collette to purchase, Vanille 44. It can only be bought there and that type of exclusivity sweetened the deal. To put it in perspective, some of my peers might liken that desire to getting their hands on the new Air Yeezy’s. I’ll take a fragrance over kicks any day, but that’s my obsession.

I stopped by Le Labo on Saturday and my heart was literally fluttering in anticipation. Upon first spritz of the tester, I was wowed, but not in a “this is the best thing I have ever smelt” kind of way. A strong but slightly sweet urine top note unexpectedly greeted me. It in fact made me take a seat. Could this be what they wanted me to take away, why? I do like untraditional scents like Serge Lutens Santal Blanc which some have said smelt pissy and Carolina Herrera’s 212 Sexy Man but this was even more offbeat. I then sprayed it on the back of my hand and allowed time to do its thing. I smelled it every so often and the urine stayed with me but then it got slightly smoky and as more time passed, slightly sweet. As I chatted with one of the customers, she asked if I was testing Oud and we agreed to smell it on one another. On her, it smelt soft. It wasn’t as pungent. When she smelt it on me, she loved it and actually thought it smelt better on me. Her reaction is probably why I ended up purchasing the .5 oz travel size, which costs $52, and I’m glad I did.

That urine smell that initially hit me, is a characteristic of Oud, which is an exotic oil that also has animalic, smoky, and musky notes. Oud is an aromatic resin that is a result of Aquilaria trees that become infected with a mold and over time produce a resin in response to the attack. When I learned this, after doing some research, it was like dejavu hit me all over again. When I first smelt, Rose 31, I questioned that “B.O.” note that initially confused me. So to answer my earlier question, yes, Le Labo meant to do this.

My findings and time allowed me to appreciate Oud 27. As with any fragrance, how it adapts to your skin is part of the decision equation. But in this instance, more so than in any other I’ve experienced, I believe one REALLY has to get past that initial smell to allow oneself to test it. In 1993 the rap group Brand Nubians had a song called “Love Me Or Leave Me Alone” and that is exactly what Oud 27 says to me. You’ll either get it or you won’t. My suggestion is to give it a try. Let time and your body manipulate the scent. It continually changes and nestles into your skin. I love it, but will you?